skip to main | skip to sidebar

Woman on the Verge of a Glass of Wine

I Can't Believe I Drank the Whole Thing! 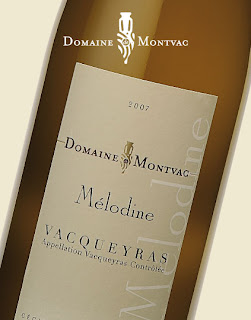 I woke up this morning with a searing pain in my head and a grogginess that I just couldn't shake. Nothing, not Advil, not coffee, not vitamins, nothing could clear the pain from my head. All I could think of in my morning of hell was, "Damn that Montvac!" You see, the 2006 Domaine de Montvac, Vacqueyras Blanc is the reason for my suffering. I drank way too much of this wine last night at Church & State, but I just couldn't help myself. I've had this wine on my list at AOC in the past, but had forgotten just how good it is.
I don't just love this wine for the fact that it is a female-owned and operated estate. It happens to be a great wine. Cécile Dussere, the third generation woman owner and winemaker blends Clairette, Roussanne, Bourboulenc and Viognier into this rich and aromatic white. She co-ferments the grapes and leaves them on their lees in oak barrels for eight months before bottling. You can imagine the resulting richness that this method achieves. The four varieties in this wine are completely complementary to one another lending aromatics and structure, creaminess and acidity all at once. The more etherial notes of baking spices and honey are balanced by the wine's clean minerality and stone fruit background. It manages to be full and round without feeling heavy or cloying.
It is incredibly versatile, pairing perfectly with rich and fatty foods as well as light and bright dishes. We actually drank it with five different appetizers that spanned the food globe from marrow bones and pork rillettes to smoky herring and frisée lardon salad. I enjoyed this wine so much that I felt the need to hoard it, to drink my first glass quickly so that I could pour myself a little more, and again a little more. Luckily for me, we had ordered the restaurant's last bottle. Lord knows how I would feel if I had gotten my hands on another glass...or two.
Posted by Styne on Wine at 8:56 PM No comments: 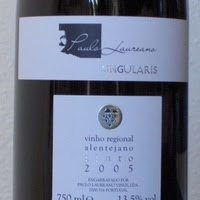 This recession sucks. Ask anyone involved in food and wine, and they will agree that the financial downturn has done nothing for us. Suddenly winemakers who previously had people begging for their high-priced, low-production, "allocated" wines can't seem to give them away. Restaurants and wine shops no longer have the luxury of cellaring wines. We are all trying desperately to hone our selections down to wines that won't sit on the shelves forever (taking up ever-shrinking cash flow dollars), while still offering a decent selection to our clientele. I try to keep my game face on about it, often citing the ideology that running a business in this climate teaches us all how to be better at what we do. And, yes, it is true. We do learn lessons about how to run a tighter ship and to be more careful about how we spend our money. Honestly though, it just seems to take the joy out of the whole thing.
But in trying to look at the situation with a "glass half-full" mentality, I have indeed found a glimmer of good in the situation. You see, for me, this economy has forced me to reach out beyond my usual wine borders and to be adventurous, tasting wines from less established regions and by newer, younger winemakers whose wines are frankly much less expensive than what I normally buy for the restaurants. This may not be a mind-blowing concept for many, but finding the truly special wine that doesn't taste like it's a bargain is a real challenge. I happened upon one of these wines yesterday.
Paolo Laureano is a producer in the Alentejo region of Portugal. He was named Portuguese winemaker of the year in 1904 and is the winemaker at Herdade do Mouchao, which has been an icon in Portugal since being established in 1901. He has consulted for other wineries as well, but this 2006 red wine, called "Singularis," is all his own. It's made from 90% Aragonez, which is more commonly known as Tempranillo in Spain and 20% Trincadeira. After hand harvesting, he ferments the wine in stainless steel tanks and then ages it in oak barrels for approximately 6 months. On the nose, this wine shows lush aromas of dark berry fruit with wisps of wheat and brine running throughout. The black fruit component continues on the palate along side notes of grilled meat and aromatic spices. This is one of those wines that I describe as a "smoker's wine" for the hints of tobacco that run through it as well as its pencil lead-like minerality. What is surprising for me about this wine is that unlike most wines from Portugal, it isn't heavy and jammy. It has just the right amount of acidity and freshness that is is able to balance its dark intensity against its silky texture and weight.
We will be pouring this wine by the glass at AOC in the next couple of weeks. I'm looking forward to having a glass myself.
Posted by Styne on Wine at 9:40 AM No comments: 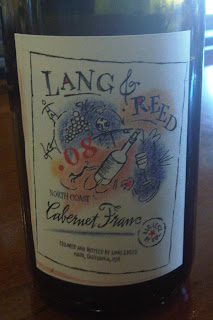 Anyone who knows me knows that I have a soft spot in my heart for Lang & Reed Cabernet Franc. I have put it on every wine list that I have created and have confidently recommended it to hundreds of people. You could call me a cab francophile because I just adore the the complexities of that grape: the bright berry notes, the hints of herbs and that characteristic green bean, vegetal quality. For me, it is one of the most versatile wines for food pairing and in the case of Lang & Reed a great wine to just enjoy any old time. I just tasted their newly released 2008 vintage. What blew me away about this wine is how serious and well-structured it has become. This is not to say that it wasn't well-made before, but it just keeps getting better year in and year out. The wine is bursting with bright berries and ripe cherry notes, cedar and spice. The green notes typical of the variety come through here as tomato leaf and tarragon with a touch of green olive. And the thing that is most compelling in this vintage is that along side all of the seductive, lush elements in this wine is a formidable tannin structure that really keeps the architecture of the wine in check, taking it beyond quaffable and fun and into the realm of, well, serious. For the past couple of vintages, winemaker John Skupny has been sourcing fruit for this wine from the North Coast AVA, more specifically Lake County, rather than from Napa where he had sourced previously. Lake County has been coming up a lot lately, which makes sense since the land and fruit there are much more affordable than that of Napa Valley. And of course, the fact that Lang & Reed has remained at a great price point makes the wine even more lovable.

Right now I'm pouring the 2007 vintage by the glass at Lucques and Tavern, where I also sell the wine retail in the Larder. I'll be moving into the 2008 any day!!

Posted by Styne on Wine at 6:14 PM No comments:

Links to the Restaurants

Styne on Wine
Los Angeles, California, United States
I am the owner and wine director of Lucques, AOC and Tavern restaurants in Los Angeles. I have the privilege of tasting numerous wines on a daily basis and really love being able to share my favorite sips with others.